Manuel Mayo will participate in The Cambridge PIER Workshops 2021 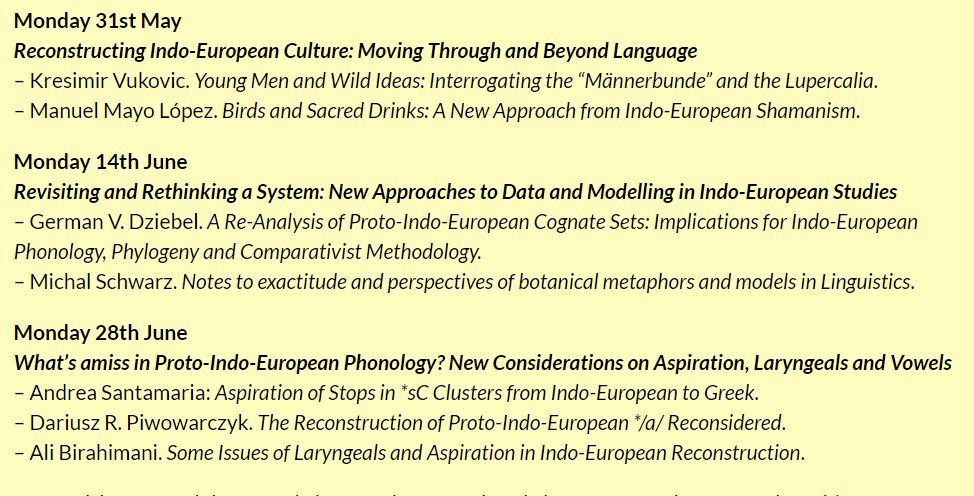 Researcher Manuel Mayo will participate in The Cambridge PIER Workshops 2021 with a panel on the Indo-European theme of birds that bring sacred drinks.

The Cambridge PIER Workshops are the warm-up events leading up to the Proto-Indo-European Reconstruction Conference: Problems, possibilities and new perspectives. During this event, which will take place between May and June, three workshops will be held around some central themes of Indo-European reconstruction. The aim of this meeting is to stimulate discussions on problems, possibilities and new perspectives for specific areas of Proto-Indo-European reconstruction.
The first panel, entitled Reconstructing Indo-European Culture: Moving Through and Beyond Language, will be chaired by the PhD student Manuel Mayo, who will talk about the Indo-European theme of birds that bring sacred drinks to the gods. During this presentation, an analysis of texts belonging to the Indian, Germanic, Greek, Celtic and Hittite traditions will be carried out in order to reconstruct, through the methodology of historical-comparative linguistics, the indicated Indo-European theme. In addition, in order to understand what is behind the myths about birds that provide drinks with miraculous properties, an approach will be made from the perspective of Indo-European shamanism and the theories on the evolution of religion.